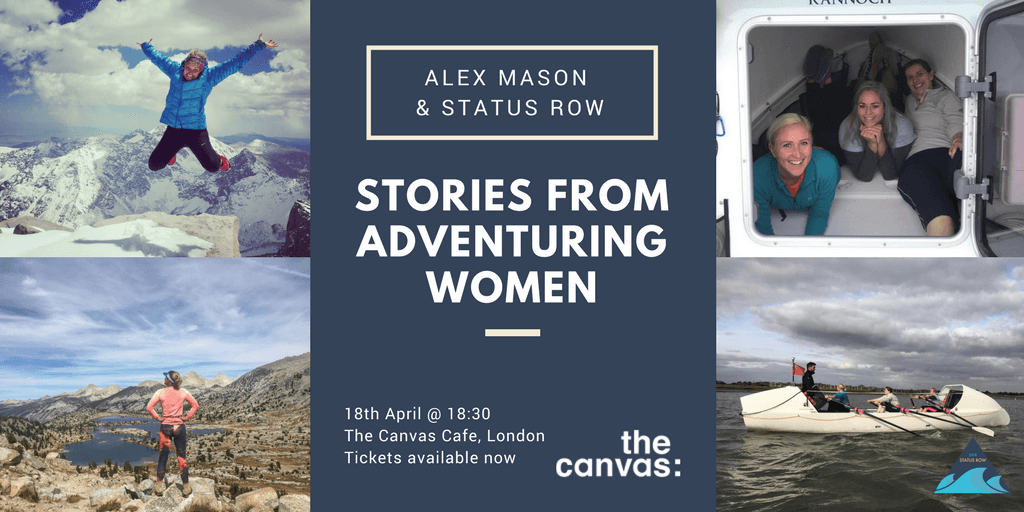 Have you ever had dreams of climbing Everest?  When you sit at your desk, do you ever imagine setting impossible goals and joining a racing team to row across the Atlantic?  Hear from four extraordinary women, who have or just about to embark on a journey of a lifetime.   These four females want to tell their stories and what lead them to take on these incredible journey’s that have changed their lives forever.

Hear from Alex Mason from The Mountains Are Calling – who has walked and trekked across the globe.  Caroline, Jess and Susan from Status Row, who are about to do a non-stop Trans-Atlantic race to be the fastest female team to row across the Atlantic.

Alex’s first big adventure was climbing Kilimanjaro back in 2006. She was unprepared and unsuccessful! After travelling through Africa for 6 months she then joined the rat race and worked as a graphic designer for a few years – a very indoors based job. Wanting to redeem herself, in 2012 she trekked to Everest Base Camp (and made it!), but it was three years later in 2015 the big adventures began. Since then Alex has hiked over 7,300 miles on long distance trails through America on the Pacific Crest Trail and New Zealand on the Te Araroa, hitchhiked her way back to Auckland, climbed a 6,500m peak in the Himalayas and most recently cycled 4,000 miles across Australia and Indonesia.

Racing in the Talisker Whisky Atlantic Challenge in December this year, the team will be rowing non-stop for 50 days, in an attempt to become the fastest, and second ever female trio to row across the Atlantic. At the mercy of the elements, the team will face a constant battle of sleep deprivation, salt sores and the physical extremes of rowing for 12 hours a day – 2 hours on, 2 hours off.

The trio is supporting the Marine Conservation Society’s ‘Clean Seas’ programme which aims to track the health of our seas, identify key sources of pollution and develop innovative solutions for cleaning it up. It is estimated that by 2050 there will be more plastic in the ocean than fish. With each stroke of the oar, they hope to inspire one less bottle dropped, and one less piece of plastic washing up on our shores.

Come to a Wednesday Wise Owl event @ The Canvas in collaboration with Absolute Alchemy, to hear from four fearless women, who have and are about to embark on the challenges of a lifetime.

Donations will be going to the Marine Conservation Society